The craft of Peter Latham

Crafting a classic. The story behind "Bonjour Akaroa".

It was April 2012 & I had my friend Siedel along for the ride down south, on my autumn photo shoot . After capturing some autumn vineyard scenes near Blenheim, I couldn’t decide where to head next. Over eggs & coffee I said, “Lets try Akaroa”. We were off! Arriving minutes too late for sunset that evening, we scoured the French settlement for any interesting spots that might deliver an image at sunrise & discovered this pier, Daly's Wharf. Immediately sensing the potential composition, I set my alarm for another early start!

Next morning when we arrived, I was excited to see these seagulls lined up on the railing - great! But the sun's rays were a long way off reaching the water. Time to get cunning & use our secret weapon: we had just four chocolate chip cookies left (Siedel’s mum bakes the best, so the sacrifice was huge!) I set up my equipment whilst Siedel rationed our bait along the railing to keep the gulls in place. Of course there’s always one bossy seagull, he was a real pain & almost killed the show...

But we persevered with the gulls & a local said "Gidday" as he rowed out in his dinghy; at exactly 8:00:36 AM the golden light reached the water, just as the seagulls settled down for what seemed like a second. Quick! I clicked three frames from left to right in order to capture this wide panorama & I don’t even remember seeing the man returning in his dinghy, but his appearance was perfectly timed. Minutes later, the sun struck the wharf & the golden reflections disappeared. Job done, time for coffee!

Despite using the most advanced photographic equipment, no camera can match the dynamic range that we take for granted with our own eyes. In order to compensate for this, I dodge & burn an image’s highlights & shadows, plus correct the contrast where necessary, until I'm satisfied I have restored the exposure as faithfully as I can to the original scene. A similar process to what I used to perform in the darkroom, minus all of the nasty chemicals!

Capturing the scene is only the first step. Once home, I download each file & begin the intensive task of editing. The funny thing is, when I joined all three frames together, the bossy seagull - seen on the railing in the left frame below, was automatically removed by my stitching software. Divine justice!

It's gratifying when the end results speak for themselves...

“We've lost count of the evenings spent with our guests admiring this beautiful piece of art & telling the tale of how it all came together. Peter booked in as a guest but left as a hero & good friend.”

Be the first to know! 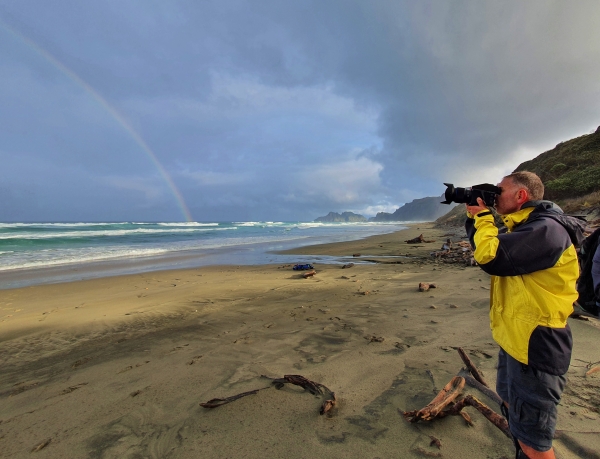 Sign up & be the first to hear about Peter's new releases, projects & a chance to travel alongside him in the field...